Western Rattlesnake is one of the most common in Austin, TX.

Texas has some ten rattlesnake species and subspecies, more than any other state except Arizona. Only three species interact significantly with human beings, however-the western diamondback (Crotalus atrox), the prairie (C. viridus viridus), and the eastern timber or canebrake (C. horridus atricaudatus). These species are widely distributed, are comparatively large, and often exhibit an aggressive temperament. The western diamondback (atrox denotes “frightful” or “grim”) accounts for nearly all the state’s serious cases of venom poisoning. The venom of all three species contains both neurotoxically active peptide components and a larger complement of enzymatic fractions that destroy blood and tissue. Diamondback venom has more of the latter as well as about a third greater overall potency than the toxins of either C. viridus or C. horridus. (SOURCE)

Rattlesnakes are common and venomous. They frequently bite and inject venom into dogs. This is painful and life threatening, and treatment is expensive. Fortunately, however, with treatment most dogs survive rattlesnake bites.Depending upon where you live, rattlesnakes might be a threat to your dog year-round or only seasonally. But regardless of your location, your dog is more likely to be bitten during the warmer months. Rattlesnake season is firing up.

If you live or recreate in rural areas, you should beware of snakes. In my experience larger, active dogs such as Labrador Retrievers are bitten most frequently, but small dogs also are at risk. In fact, a strike is much more likely to be fatal in small dogs, and I know plenty of Chihuahuas who like to hike.

Dogs explore the world with their noses, and they are most frequently struck by rattlesnakes when they try to sniff them. The nose and muzzle are the most frequent sites for the bites, which is unfortunate because swelling from the strike might compromise the dog’s airway. Dogs being bitten on the forelimbs is also common. Direct strikes to the chest and into the heart have been reported.

Rattlesnakes are not poisonous. Rather, they are venomous. Poisonous animals contain tissue that is toxic when eaten. Larger rattlesnakes are more deadly than smaller ones. (Some people believe the opposite is true.) Also, thin rattlesnakes are hungry, and they’re more dangerous than well fed (and fatter) ones for the simple reason that they usually haven’t struck any prey recently and have more venom at their disposal. Snakes that are heading out for their first foray of the season — such as they might be doing now in many places — are the most dangerous of all.

Rattlesnake venom contains a complex mixture of active toxins, and nobody frankly completely understands how it works. These toxins include enzymes, metals, proteins, lipids, glycoproteins, biogenic amines, and amino acids. (Hat tip to Richard F. Clark, MD, who provided this information at a great talk on rattlesnakes at the 2012 Squaw Valley Wilderness Medicine Conference.)

However, what happens when an individual is bitten is much more clear. Swelling and pain are universal. Local tissue and blood-vessel damage are common. Blood clotting disorders and a condition called thrombocytopenia (which further exacerbates blood clotting problems) are common. Seizures, coma, heart disturbances, and death might occur.

Red Heeler on a fallen tree by Shutterstock.

Where and when to avoid snakes

Your dog, your stress level, and your bank account will be better off if you don’t encounter a rattlesnake. The best way to protect your buddy is the same way to protect him from fights, foxtails, getting lost, and being hit by a car: Use a leash and pay attention. It also helps to know the ways of your adversary. Rattlesnakes are most active in the heat of the day, and they are most frequently found around rocks, shrubs, and bushes (although they might bask in the open, especially in the morning). Some trainers and vets offer rattlesnake aversion training, and I recommend this for people who live or play in high-risk areas.

What to do after a bite — and what not to do

Unfortunately, dogs can be bitten even if their owners do everything right. If this happens to you, go straight to the vet, as soon as possible. Do not try to suck out the venom, do not cut the skin overlying the site, do not apply to a tourniquet to the area, do not administer aspirin or any other nonsteroidal antiinflammatory drugs, and do not ice the site. Stay calm, try to keep your dog calm, and go to the vet. If your dog is small, carry him to the car. If not, walk him back. During the walk, focus on the fact that most rattlesnake bites are not fatal to dogs.

Ice, incisions, and tourniquets can exacerbate the tissue damage that is caused by the venom, and they do not significantly affect outcome. Aspirin and similar drugs can exacerbate blood clotting problems, and they might interfere with treatment at the vet. Venom sucking is an ineffective rural legend. It will not affect the outcome, and I should point out that applying your lips to a painful wound on your dog’s muzzle could cause your dog to bite you on the face.

The main treatments for dogs are pain control (using narcotics, not nonsteroidal antiinflammatory drugs) and antivenin. Antivenin is produced most frequently by injecting rattlesnake venom into sheep or horses. This causes the animals in question to develop antibodies to the venom. Later, their blood is drawn and the serum, which contains proteins (including antibodies) is dried into a powder.

Antivenin neutralizes the toxins in the venom, and its rapid administration makes a huge difference. However, antivenin also contains large quantities of proteins that are not relevant to the treatment. These can cause complications and allergic reactions. Fortunately, recent advances in antivenins have improved their safety. Nonetheless, antivenin is nowhere near as good as prevention.

So, what about the vaccine? I love the theory behind the vaccine: It’s designed to stimulate dogs to produce their own antibodies — in other words, their own antivenin. And one thing is clear: Individuals who are bitten repeatedly by rattlesnakes experience decreasing symptoms with each bite. But the vaccine is controversial. Why?

To start, no good studies have been offered up to show that it works. The vaccine has been demonstrated to cause increases in “protective antibodies,” but nobody knows the quantity of antibodies that are necessary to offer true protection.

In the vaccine’s defense, the only way to prove its efficacy would be to run a prospective study that would involve dogs being injected with rattlesnake venom. If that sounds unethical to you, you’re not alone. If such a study were under way I’d be tempted visit the site with a pitchfork and a torch.

Eventually a large retrospective study might shed light on whether the vaccine works. For now, we must rely on anecdotal reports, and these reports are mixed but mostly favorable. Many vets believe the vaccine works well, but some do not. Anecdotal reports contain variables such as “dry strikes” (ones that contain no venom), the fact that different dogs react differently, variations in quantity of venom injected during strikes, and possibly each snake’s individual venom composition.

Complications from the vaccine are rare in my experience. I believe the benefits outweigh the risks for active dogs who frequent high-risk areas.

If you vaccinate your dog, remember this: The vaccine is meant to help a bitten dog survive until he can be treated by a vet. All dogs — vaccinated or not — need immediate veterinary care after suffering a rattlesnake strike. Always.

Don’t just vaccinate your dog. Use a leash, pay attention, and get some snake-aversion training for your pal. Prevention truly is the best medicine. (SOURCE) 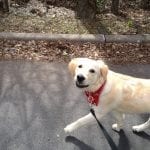 Track Your Dogs Walking and Exercise with the Whistle Tracker, Austin TXDog Exercise